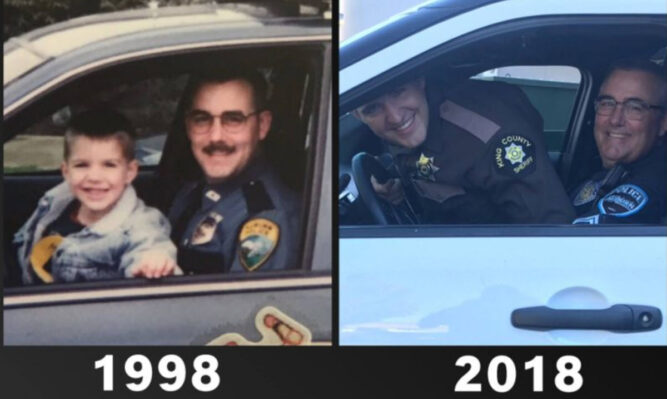 Back when officer Andrew Gould’s son was just a little boy, he aspired to be just like his uniformed dad when he grew up. Now, 20 years later, his dreams finally came true.

In that original, Gould was posing with his young son in his patrol car, and the handwritten caption reads, “When I get bigger I’m going to be my Dad’s partner and catch the bad guys and burglars.” 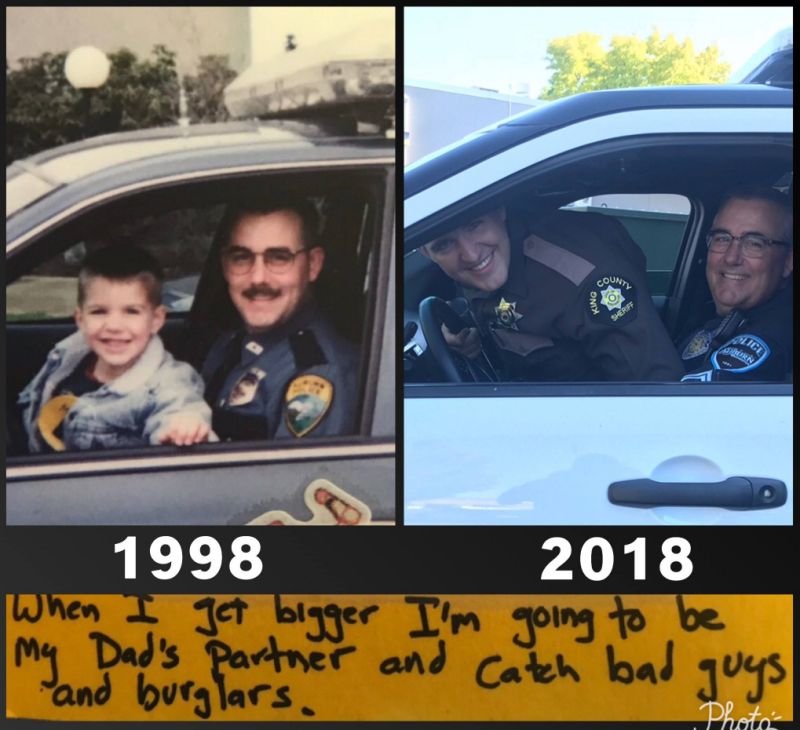 The most recent photo has a few updates. For example, it shows Gould without a mustache and with a few grey hairs. But he’s still rocking his police uniform. And as for his son, who’s now full-grown adult, he’s squished onto his dad’s lap in the driver’s side of the vehicle, which was no easy task as they will tell you!

“At 6’7”, it was a hard squeeze to fit Officer Gould’s son in his patrol vehicle on Father’s day this year, but they did it!” notes the caption. “As you can see, his son did follow his dad into law enforcement just as predicted in this Father’s Day card in 1998. Recreating the photo 20 years later was a wonderful tribute to father and son. Hope all you fathers out there had as wonderful a day as our own Officer Gould!”

At 6’7”, it was a hard squeeze to fit Officer Gould’s son in his patrol vehicle on Father’s day this year, but they did…

Gould was able to follow in his dad’s footsteps and join law enforcement after all. And although they are not partners, his son works in the same area, as a King County Sheriff’s deputy, according to KIRO7.

“That’s awesome stuff right there!!!! Thank you BOTH for your service,” wrote a commenter. Wrote another, “Thanks for leading the way, Dad. Thanks for following those big footprints, Junior! Stay safe!”

What did you make of this touching father-son photo? Let us know in the comments section below, and please be sure to share this story with your friends and family.