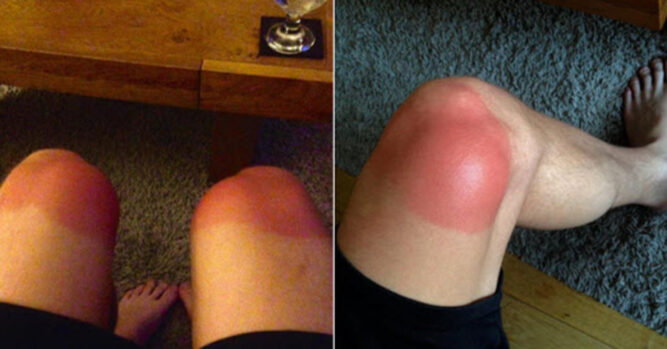 It’s amazing that we are now in the middle of the summer. It just seemed like so short of a time ago that we were complaining about the cold weather, snow and frigid winds. Now we have warm weather, sunshine and lots of time on our hands. We may even find time to head down to the beach and get out in the sun for a little while. It’s a healthy choice because it gives us a good dose of vitamin D but if you aren’t planning ahead, you may end up in a bind.

One of the worst things that could happen to you while you were out for a day in the sun is to get a sunburn. It may be nice to get the sun exposure for a little while but if you have a sunburn, it is going to remind you of your forgetfulness for quite some time. We all know that it is just a matter of wearing some sunscreen and being a little smart with your recreational choices. Then again, even if we do wear sunscreen, we may forget that there are times when the sun may hit areas we are forgetting.

One of the reasons why you would want to consider your clothing choices when being out in the sun is because of a particular fashion trend, ripped jeans. I know that trends come and go, but this one has been sticking around for a while and it is now leaving people a little sore because of a sunburn.

Where your jeans are ripped is not going to win you any prizes as far as intelligence is concerned. What it is going to get you is a unique design on your skin, and one that can be quite uncomfortable.

Noteworthy when it comes to getting this type of a sunburn. Your blue jeans will protect you, but only in particular areas. You will still have a reminder of what your skin should look like in place.

Ripped jeans are cool unless you bake after 73 seconds in the sun pic.twitter.com/70yowW8ptU

Some people will burn very quickly and it can be a painful reminder that comes back to haunt you years from now.

*do not* go sit in the sun for 2+ hours wearing ripped jeans…..i learned my lesson today pic.twitter.com/FtHMNdjDWo

Other people are just going to continue with the same fashion trend and the same problems.

Never again will I wear ripped jeans while I'm out in the sun 🙅☀️ pic.twitter.com/dz4EBRSy5O

Some of the burns are going to stand out more than others.

There are certain moments in our lives that define us. Don’t let your moment be a picture on Twitter letting the world know that you forgot to put sunscreen where the sun shines.

Lesson learned: Mexican/Italians should not wear ripped jeans in the sun. I look like Tony the tiger pic.twitter.com/rlyWYuhH