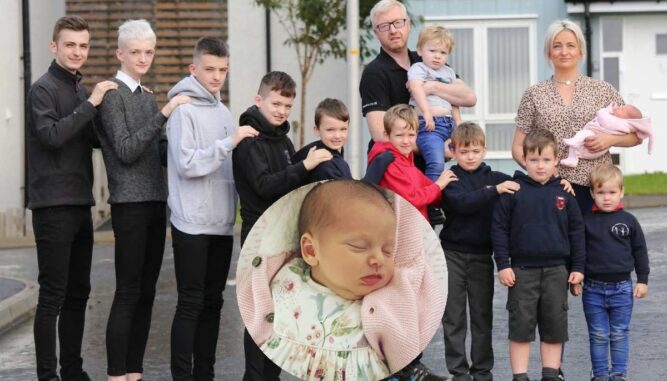 Every boy’s mom knows that while you may love your little rascal (or rascals), it can be a struggle being the only woman in the house. Luckily for Alexis Brett, it looks like for her the 11th time is the charm! You see, the mom from England just gave birth to her first daughter after having 10 (nope, that’s not a typo) boys in a row!

The mom first suspected that she was pregnant with her eleventh child last Christmas eve. And her suspicions were confirmed after taking a home pregnancy test. At first, she just assumed that they were having another boy, but she and her husband David decided to get a gender scan, just to check.

“It’s a fantastic feeling,” the mom told The Daily Mail.

Brett gave birth to her first son when she was 22, and over the last 15 years had nine more boys. So, you can imagine her surprise when she was told that this time they would have to start buying their onesies in pink!

“Curiosity did get the better of us,” she recalled. “When the results came in the [mail, (my son)] Harrison opened the envelope because I was too nervous. When we realised it was a girl, we were amazed. It sounds silly because it’s a 50-50 chance, but we were surprised anyway.”

“We’re over the moon,” she added. “I’d been expecting to hear we were having another boy but when I found out it was a girl, my face was a picture. I was shocked but delighted. Now she’s here with us, it’s a fantastic feeling.”

The mom brought her new daughter into the world on August 27 and shared that she named her Cameron after the actress Cameron Diaz. Cameron’s birth marks the 16-year age difference between her and her eldest brother, 17-year-old Cambell. Not to mention her other brothers, Harrison, 16, Corey, 14, Lachlan, 11, Brodie, 9, Brahn, 8, Hunter, 6, Mack, 5, Blake, 3, and Rothagaidh, 2.

“We’re definitely stopping now,” the mom joked. “No more! I remember saying that last time, but this time I absolutely mean it. I love my family as it is now.”

Both parents also mentioned that Cameron had been a terrific influence on her brothers in just the few weeks she’s been home.

“They have generally been much better behaved around her, trying to keep quiet in case they wake her up. They also want to help with holding and feeding her. It’s been great,” David explained.

However, Brett shrugged off the notion that she had been aiming for a girl throughout her many pregnancies.

“We’ve been asked a lot whether we’ve had so many children because we were hoping for that elusive girl,” she said. “But I can honestly answer no. Cameron wasn’t planned, but I was happy all the same, and if another boy had been on the way it wouldn’t have bothered me.”

“I’m an only child myself and I’d never planned to have a large family, but now that I do, I love it. I always joked I wouldn’t have a clue what to do with a girl anyway but that’s all changed now, of course, and I have to admit that we’re having a lot of fun buying pink things for the first time,” she continued.

The mother of 11 says she occasionally gets judged for her large family.

“Of course, we do get comments about the number of children we have,” she said. “But it doesn’t bother me what people think. We’re well used to it. Some people think we must be on benefits, but we’re not. David has a good job which means we don’t even qualify for full child benefits.”

The mom also shared that for now, Cameron will sleep in a crib located in her parents’ room, but she will eventually get her own space in their five-bedroom home once some of her older brothers move out of the house.

Although Cameron’s birth means that the house will become a bit more of a tight squeeze, Brett says that she doesn’t mind one bit.

“David and I do look at each other sometimes to say ‘What have we done?’ … but we could never imagine life with a small family now.”

What do you think of Brett’s story? Let us know in the comments section, and please be sure to share this story with your friends and family.

We use cookies on our website to give you the most relevant experience by remembering your preferences and repeat visits. By clicking “Accept”, you consent to the use of ALL the cookies.
Cookie settingsACCEPT
Manage consent

This website uses cookies to improve your experience while you navigate through the website. Out of these, the cookies that are categorized as necessary are stored on your browser as they are essential for the working of basic functionalities of the website. We also use third-party cookies that help us analyze and understand how you use this website. These cookies will be stored in your browser only with your consent. You also have the option to opt-out of these cookies. But opting out of some of these cookies may affect your browsing experience.
Necessary Always Enabled

Any cookies that may not be particularly necessary for the website to function and is used specifically to collect user personal data via analytics, ads, other embedded contents are termed as non-necessary cookies. It is mandatory to procure user consent prior to running these cookies on your website.