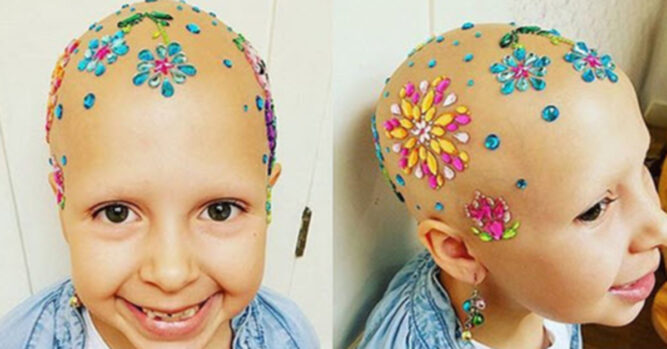 Many people stress over losing their hair, especially when it actually starts to happen. They will do almost anything to try to keep it from falling out but when it does happen, you can either stress over it or take a page out of eight-year-old Gianessa Wride’s book and ‘make lemonade out of lemons’. What she did is inspiring people around the world for all the right reasons.

When Gianessa’s hair began to fall out suddenly in clumps, it took her mother by surprise. Daniella Wride was trying to remove tangles from her daughter’s hair in January 2017 but the more she brushed, the more hair kept falling out. It only took 21 days until her hair was completely gone. It was then that the family realized that she had alopecia, and autoimmune disease. The hair that she lost, including her eyebrows were not likely to ever grow back.

Hey everyone, so we went to the doctors for Gianessa today. She has been diagnosed with alopecia areata. It is an auto-immune disease. She had the stomach flu about 1 1/2 weeks before she started losing her hair. The doc said that her body wanted ao badly to fight that virus that it got a little to excited and created antibodies again her hair as well. He said that the pattern in which her hair is falling out, mainly referring to along the hairline in front by her forehead, means she may not ever really grow it back. Also, she has had eczema, which apparently is linked in some way, but I need to look more into that. There is no cure or medication she can take. They can do pill steroids, but once she stops taking them the hair falls out again. Also, they can do steroid injections into the scalp. Neither of these options sits well with Tyler and I so for now we will embrace her new fabulous look. Her asthma has been acting up lately and he immplied that she maybe allergic to dogs or cats or something else now. And if her asthma acts up it sends signals to her body to try and fight something, which in turn aggravates the hair loss. She is still her beautiful, sassy, smart, loving, kind self. And I'm excited to embrace this and have fun trying new things with her. This girl is fierce and brave, way more so than I could have ever imagined. I love her more than anything. #alopecia #alopeciaareata #brave #baldisbeautiful #nohairdontcare #youthinkyourehavingabadhairday

“It was upsetting to her,” Gianessa’s mother, Daniella Wride, said, “and it was hard for me as well, but not because of what she looks like. I was more upset thinking that somebody might bully my daughter and I didn’t want her to ever feel less beautiful than she is.”

Many schools hold a ‘crazy hair day’ competition and it allows the students to comment with their hair decorated in many different ways.

Daniella heard that her daughter’s school was also holding such a competition during Spirit Week. She knew that her daughter did not like wearing wigs or scarves, so she decided to make the most out of her baldness.

The inspiration came when Daniella was walking through the scrapbooking department at a local store. The 30-year-old mother found a number of adhesive jewels and she knew that her daughter loved glitter. At first, she was afraid that her classmates would think that her daughter was weird for bedazzling her scalp but within moments, the worry disappeared.

Not only did people love the look, they gave her first place in the competition. After posting the pictures on Instagram, they went viral and now the girl is looking for other ways to decorate her bald head. “I was sad at first when I lost all my hair, but now I love being bald,” she said.

No trip is complete without a photoshoot with Papa. #alopecia #warrior #alopeciaareata #brave #princess #baldisbeautiful #youthinkyourehavingabadhairday

“I can do things to my head that other kids can’t. I’m thinking now it might be fun to decorate my head with some sparkly butterflies and flowers.” Gianessa has always been a big fan of anything glittery or shiny. One day she even hopes to be a fashion designer.

Our alopecia journey began 1.1.2017 and just 21 days later she made up her mind to cut off the rest. We braided what was left and she took the scissors to it and she chopped it off. She was brave enough. She took control. She is such a warrior! #alopeciaawareness #alopecia #nohairdontcare #baldisbeautiful #cut #cutitoff #brave #beautiful #warrior #unicorn #unique #enjoythewride

“So putting stick-on jewels on her head really is a good fit for her personality,” she says. “And it adds some fun to what could be a stressful time for a girl with no hair. It’s my hope that she’ll continue to want to be herself and express herself in any way she feels comfortable, as she grows older.”

Daniella is hoping that all of the positive responses they have received will raise awareness about alopecia and inspire others to help their family members in unique ways.

January 1, 2017 I found Gianessa's first patch while brushing her hair after bath time. It just kept coming out into her hair brush. Fast forward 21 days and 90% had already fallen out before we could get into a dermatologist. I felt so helpless and at such a loss. Trying to explain this to a then 7 year old was difficult. But Gianessa being who she is was bright and optimistic. #alopeciaawareness #alopecia #baldisbeautiful #unicorn #brave #beautiful #gianessa #enjoythewride #hair #nohairdontcare

It is thought that the loss of her grandmother caused stress that may have triggered the hair loss. “Your hair doesn’t make who you are — it’s whats inside that counts,” she said. “That’s what we tell Gianessa. People feel inspired by her, and that’s wonderful. We’re hopeful that she’ll show other bald kids that they can also embrace their baldness and can rock any look they want, in any way they can.”

🌼🌷Crazy Head Day 2018🌷🌼 I asked Nessa what she wanted to do this year and she replied, " I want to be covered in diamonds!" Spoken like the true princess she is. Seriously, not sure there is more of a past life Queen than this young lady. #alopecia #princess #diamonds #crazyhairday #alopeciaawareness #baldisbeautiful #gorgeous #queen #hair #nohairdontcare #smile #stunning #enjoythewride #gianessa #alopeciaareata #alopeciatotalis #alopeciauniversalis